Professor Peter Kuch speaks about this recent book on divorce in Joyce's Ulysses. Bloom's "Divorce, not now" and Molly's "suppose I divorced him"—whether whim, wish, fantasy, or conviction—reflect a forgotten Irish practice of petitioning the English courts for divorce that Professor Kuch uncovers in his reappraisal of marriage in Ulysses. Peter Kuch is the inaugural Eamon Cleary Professor of Irish Studies at the University of Otago in New Zealand. He has published widely on Yeats, Joyce, Eliot, Irish theatre, Irish and Australian film, literary theory and Irish/Australian history. More information here.

You are all cordially invited to the first Leuven Centre for Irish Studies lecture of 2018-2019 which will be given by Peter Kuch (University of Otago) on Joyce's Ulysses and the Law—Sex, Divorce and issues of Public Morality on Thursday 11 October at 5 pm in the Jos Creten Room (LETT 01.52). 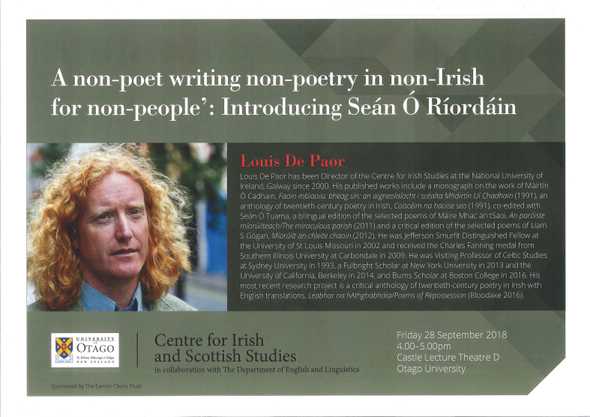 De Paor has been Director of the Centre for Irish Studies at the National University of Ireland, Galway, since 2000.

His published works include a monograph on the work of Máirtín Ó Cadhain, an anthology of twentieth-century poetry in Irish, Coiscéim na haoise seo, co-edited with Seán Ó Tuama, and has edited bilingual and critical editions of Irish poets selected poetry. He was Jefferson Smurfit Distinguished Fellow at the University of St Louis-Missouri in 2002 and received the Charles Fanning medal from Southern Illinois University at Carbondale in 2009. He was Visiting Professor of Celtic Studies at Sydney University in 1993, a Fulbright Scholar at New York University in 2013 and the University of California, Berkeley in 2014, and Burns Scholar at Boston College in 2016.

His most recent research project is a critical anthology of twentieth-century poetry in Irish with English translations, Leabhar Na hAthghabhála: Poems of Repossession (Bloodaxe 2016).

Sponsored by the Centre for Scottish and Irish Studies, Louis De Paor speaks on modern and contemporary Irish poetry, and his experience of editing anthologies and critical editions of twentieth-century Irish poets.

Fintan O'Toole at the University of Otago, 6 September 2018

Audio of Fintan O'Toole's talk can be heard at this link (public; no login required). Many thanks to everyone who came along! 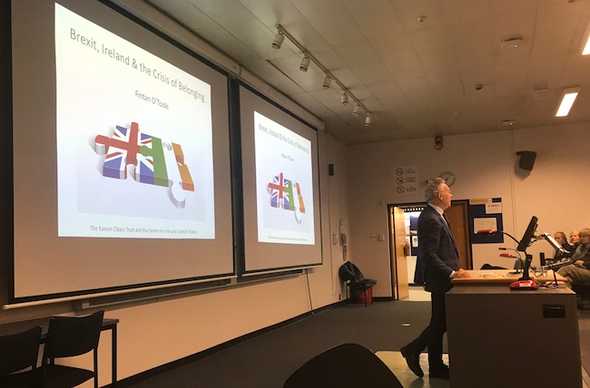 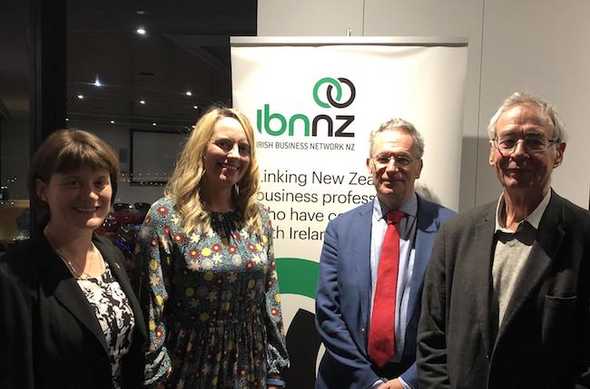 Fintan O'Toole spoke today with Kathryn Ryan, on Radio New Zealand's Nine to Noon programme. The podcast of the interview can be accessed here. O'Toole speaks in Dunedin this evening, 6 September. 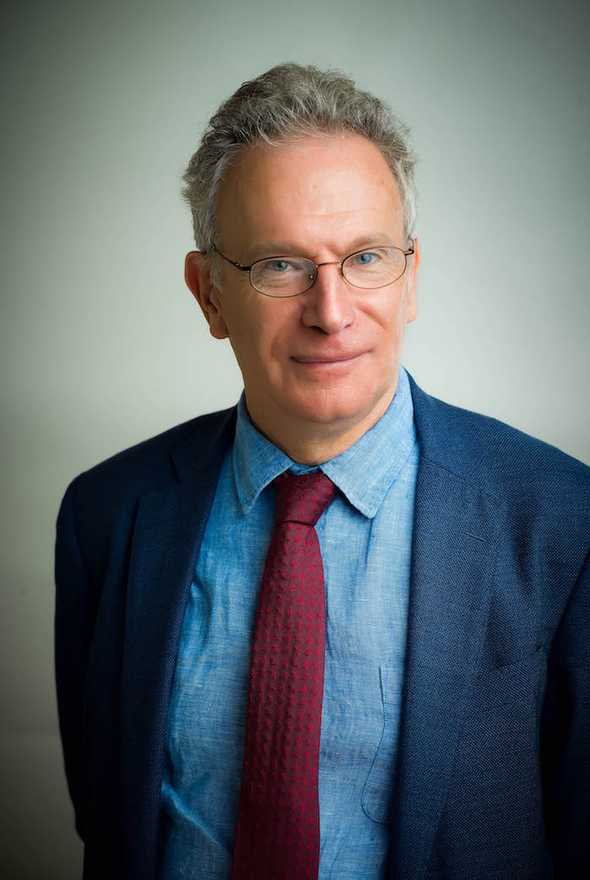 Leading Irish public intellectual and journalist Fintan O'Toole will be speaking on Brexit and the Irish context, in both Auckland and Dunedin, in early September.

The Auckland lecture is on Monday 3 September, 5.30pm, in the PWC building, 188 Quay Street. This lecture is ticketed: information about purchasing a ticket can be found here. Poster in pdf form here.

As part of his week-long visit to New Zealand, the Rt Hon David Mundall MP, the Secretary of State for Scotland, visited the Irish and Scottish Studies Centre to meet Irish and Scottish post-graduate students and learn about the Centre's promotion of Scottish literature, history and culture.

The Dublin James Joyce Summer School will run from 1st July-8th July 2018. Professor Peter Kuch is one of the invited lecturers.

The latest cohort of Irish Studies postgraduate students were recently profiled in the Alumni News section of the University of Otago website. 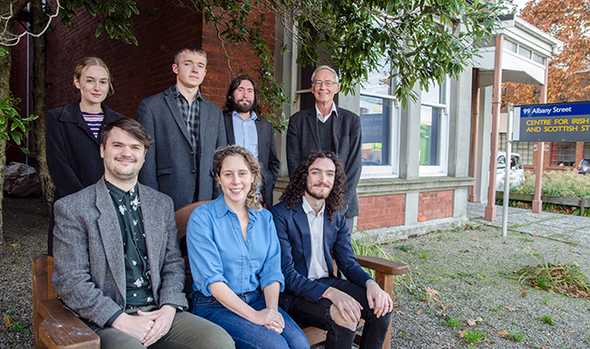 Lecture by Peter Kuch 'Ulysses and the hidden history of Irish Divorce, 1857–1922'

Professor Peter Kuch recently gave a lecture entitled "Ulysses and the hidden history of Irish Divorce, 1857–1922," at Concordia University, in Montreal, based on his recent publication Irish Divorce / Joyce's Ulysses. The Faculty of Arts and Sciences wrote a article in anticipation of the lecture, which you can read here.

From Pushkin to Pasternak – Seamus Heaney's Passion for Russia

The Eamon Cleary Trust and the Centre for Irish and Scottish Studies are pleased to host a lecture by Stephanie Schwerter (Professor of Anglophone Literature, University of Valenciennes, France), entitled "From Pushkin to Pasternak – Seamus Heaney's Passion for Russia". Previously, Professor Schwerter taught translation studies and comparative literature at the École des Hautes Etudes en Sciences Sociales, and chaired the German-French translation programme at the Fondation Maison des sciences de l'Homme in Paris. Before moving to France in 2008, she lived in Northern Ireland and worked at the University of Ulster and at Queen's University, Belfast. She is the author of Northern Irish Poetry and the Russian Turn: Intertextuality in the work of Seamus Heaney, Tom Paulin and Medbh McGuckian (London: Palgrave Macmillan, 2013). In addition to numerous peer-reviewed articles and book chapters she has co-edited Bridging Cultures: Intercultural Mediation in Literature, Linguistics and the Arts (Ibidem, 2012) and Transmissibility and Cultural Transfer: Dimensions of Translation in the Humanities (2014). Her current research is for a book to be entitled Belfast, Beirut and Berlin in Contemporary Film.

Professor Schwerter is also presenting at the Department of Media, Film and Communication.

Private meeting with A Shoilse / His Excellency, The President of Ireland, Michael D. Higgins, on the occasion of his state visit to New Zealand. 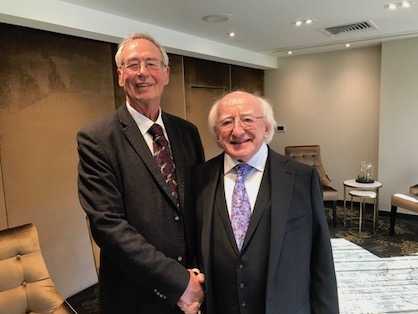 Recently, our inaugural Eamon Cleary Professor of Irish Studies, Professor Peter Kuch, met with the President of Ireland, Michael D. Higgins, during his state visit to New Zealand (the first head of state to meet with our new Prime Minister). In his address at the state dinner, President Higgins made specific mention of Peter's recent monograph in the context of the impressive amount of research about the Irish contribution to New Zealand. Indeed the whole address is worth watching, which you can do here:

Public Lecture: Professor John McCourt, 'The Island and beyond: Irish (literary) Studies in a transnational world' 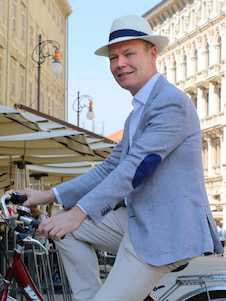 John McCourt is Professor of English at the University of Macerata. He previously taught at the Università Roma Tre where he was director of CRISIS (the center for research in Irish and Scottish literature) and at the University of Trieste (where he co-founded and continues to co-direct the Trieste Joyce School). In this talk, Professor McCourt analyses how modern Irish (literary) studies are navigating a transnational world.

He is the author of many books and articles on James Joyce and the 19th and 20th century Irish literature including The Years of Bloom: Joyce in Trieste 1904 - 1920 (2000). In 2009, his edited collection, James Joyce in Context, was published by Cambridge University Press. In the same year he published Biographical Issues: The Many Lives of Yeats and Joyce (Bulzoni). This was followed by Roll Away the Reel World: James Joyce and Cinema (Cork University Press (2010).) He is a Trustee of the International James Joyce Foundation and a member of the Academic Board of the Yeats Summer School. In 2015 he published Writing the Frontier Anthony Trollope from Britain and Ireland (Oxford University Press). He recently co-edited Flann O'Brien: Problems with Authority with Paul Fagan and Ruben Borg (Cork University Press) and is currently editing a collection of essays on Brendan Behan.

Emer Rockett, Trinity College, Dublin, presented a public lecture titled, "The Panorama and Ireland." This powerpoint presentation focused on picture-going in Ireland prior to the invention of cinema. Wed, 10 August, 2016.

Prof Kevin Rockett, Trinity College, Dublin presented a public lecture titled, "Film and Irish Revolution." This talk explored cinema relating to the 1916 uprising and War of Independence, and considered British and Republican views of the period and films made in subsequent decades. Wed, 17 August, 2016. 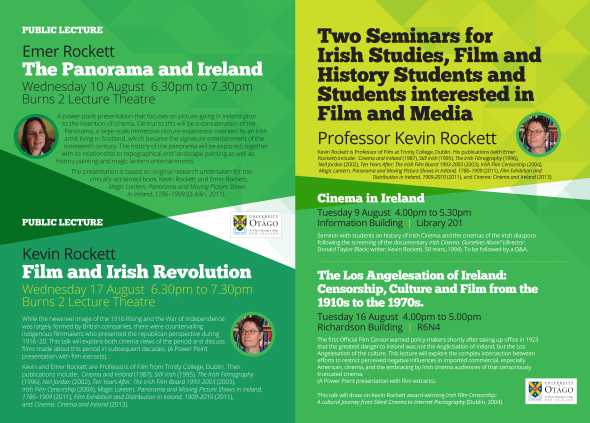 New Zealand premiere screening of the Keough-Naughton Institute of Irish Studies (University of Notre Dame) documentary 1916 The Irish Rebellion was held at the Auckland War Museum on Tuesday, 21 June, 2016.

The documentary, which is narrated by Liam Neeson, tells the story of the 1916 Easter Rising and combines rarely seen archive footage with contemporary visuals and analysis from a number of the world’s leading experts in Irish history.

The Centre of Irish and Scottish Studies and Toitū Otago Settlers Museum hosted a two-day conference open to the public that brought together local and international experts to begin telling the story of New Zealand's response to the 1916.

"'Yet no clear fact to be discerned': the New Zealand response to the 1916 Easter Rising" was held in Dunedin on 22-23 March 2016. The conference was one of several hundred international events remembering 1916 as a pivotal time in Irish history. Please visit the conference website for more information. 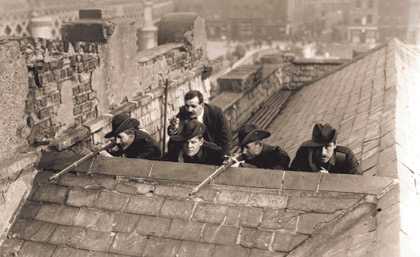 Congratulations to the winners of the 2016 Eamon Cleary Scholarships! 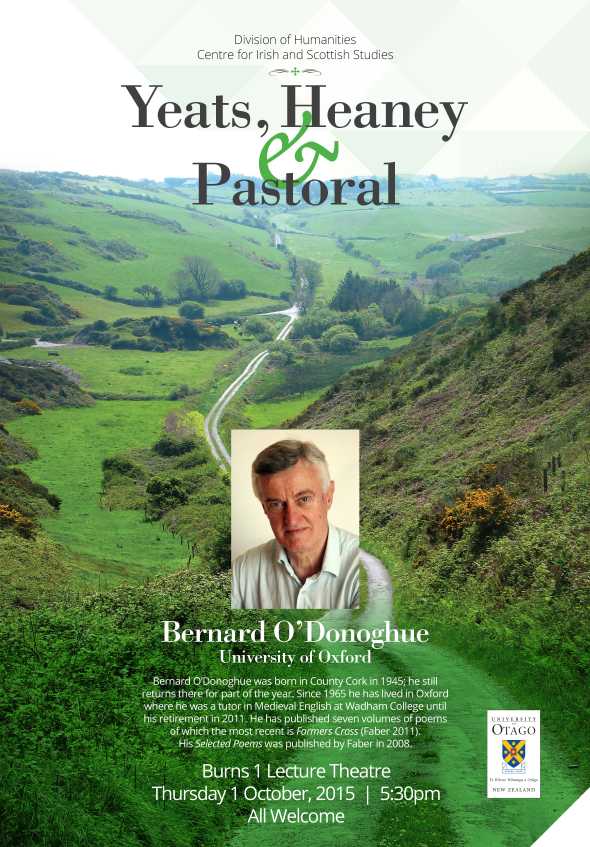 A public lecture was presented by Bernard O'Donoghue on Thursday 1 October 2015.

Bernard O'Donoghue was born in Co Cork in 1945 and he still spends part of the year there. Since 1965 he has lived in Oxford where he taught Medieval English and Modern Irish poetry at Magdalen and Wadham Colleges. He is now an Emeritus Fellow of Wadham. He has published books on medieval love poetry and on modern Irish poetry, especially Seamus Heaney. He has also published six books of his own poetry including Selected Poems (Faber 2008) and Farmers Cross (Faber 2011).

The Centre for Irish and Scottish Studies enjoyed a reunion of staff, associates, and postgraduate students past and present:

Public Lecture: “Sailing to an Island”: The poetry of Irish and Scottish islands

For generations islands have been an inspiration to Irish and Scottish poets. This lecture will explore how island poems have helped to shape our understanding of nation and community, as well as of spiritual and creative experience.

This free event was held on Thursday 20 March, University of Otago. Click here to see the poster.

Jonathan Swift was the most significant Anglo-Irish writer of the eighteenth century and his works sold widely. This lecture looks at Swift’s life and works and then at the scuffle that developed in Dublin when an upstart bookseller challenged an established bookseller for the right to print and sell the hot property that Swift’s works had become.

Click here to see the poster. This was a free event. 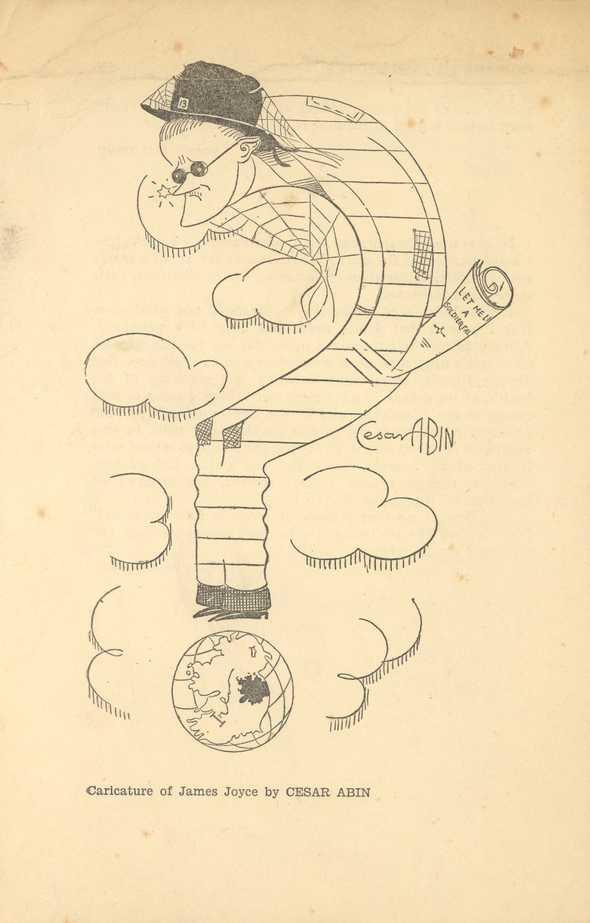 Irish Studies at the University of Otago presented a 3 day seminar that aspired to bring together dedicated and enthusiastic Joyceans from New Zealand and Australia to share their ‘worlds’ with one another, and with distinguished speakers Professor Vicki Mahaffey (University of Illinois) and Dr Tony Thwaites (University of Queensland). Click here for the programme for the event.

The seminar included the following public lectures, engaging for all lovers of Literature:

"Practicing Joyce", by Professor VIcki Mahaffey (University of Illinois); and

The Centre for Irish and Scottish Studies hosted a ‘wake’ for Seamus Heaney on Monday 9 September 2013.

For more information about Prof Gibbons and his presentation held on 5 September 2013 please visit the Irish Studies homepage. 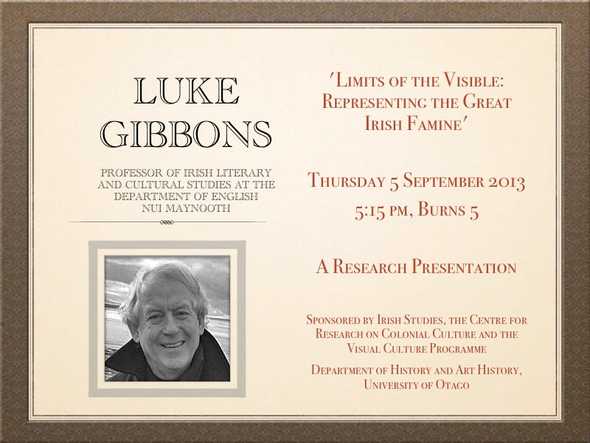 Visit of the President of Ireland, Mary McAleese 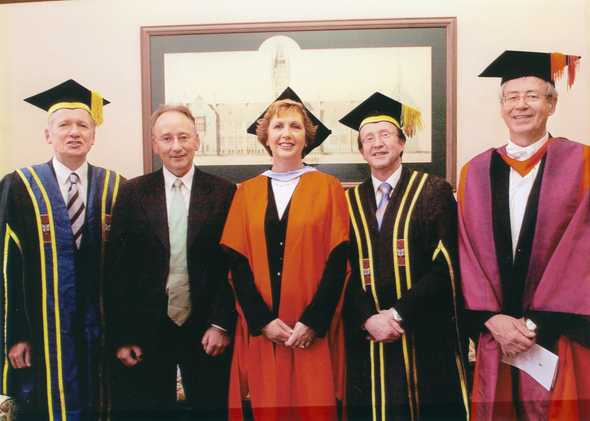 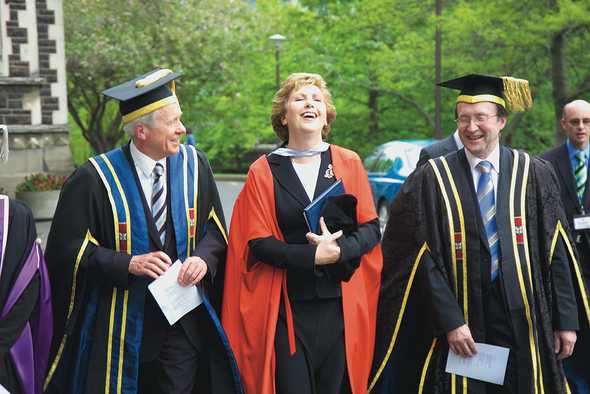